The region of Murcia its charactised by the typical Mediterranean semi-arid subtropical climate: namely an average annual temperature of 18ºC, with hot summers (registering absolute maximum temperatures of 40ºC) and mild winters (an average temperature of 11ºC in the winter months of December and January).

Murcia's region has a number of days per year with clear skies is 120-150, with approximately 2,800 sun-hours per annum. In general rain is scarce throughout the region (approx. 300-350 mm/year), falling mainly in the spring (April) and autumn (October), leaving the summer an eminently dry season. Make sure if you visit the murcia region to get your car rental in murcia with air conditioning.The region of Murcia is characterised by certain climatic differences which may lead to variation in the above-mentioned figures. These variations depend on the orientation and exposure to the dominant winds, the distance from the sea and the configuration of relief. Due to these factors, the temperature differences between the coast and the interior are much more extreme in the winter. On the coast temperatures tend never to fall below 10ºC, whilst inland at higher altitudes they may not exceed 6ºC. The latter areas show a higher average annual rainfall, which reaches 600 mm/yr. 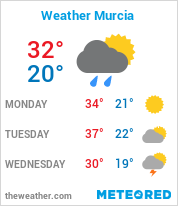